Too timid for 8th Grade PE class, but I've bicycled across USA. Also published in The Betty Pages, Bellingham

December 17, 2020
Pullman, WA. My 8th grade PE teacher, Mr. Bush, called me into his office for a pep talk one day. He noticed I had no interest in sports. I always tried to go as far into the outfield as I could get, during baseball. I could care less about the game.

He was worried that I wasn't trying. With my lack of drive, I might not succeed in life. He said, "When you grow up, it's going to be a tough world out there." "You've got to push harder."

I didn't know how to respond, except to say that I ran a home run in baseball one time. That was only after another PE teacher went to bat for me and hit the ball out of the park. He set that all up so I could run all the bases. A ploy to help me gain confidence.

Walking home from school that day, it dawned on me that I had forgotten to tell Mr. Bush about the 60 mile bicycle trip I did during the summer between 7th and 8th grade. That would have been a more assuring response for him, but one usually thinks of the best comeback after the fact.

About 30 years after the fact, I encountered that PE teacher again. This was a few years after I'd bicycled all the way across the United States.

He remembered that conversation, from 30 years ago, and was well impressed. 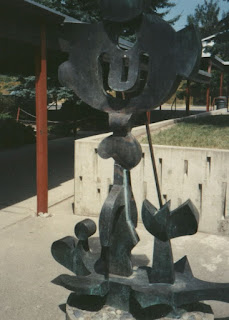 Sculpture of a Cyclops near the main entrance of Lincoln Junior High (now Lincoln Middle School) in Pullman, WA. Photographed 1991.

I sent him a copy of my self published book called "America at Ten Miles Per Hour." Pictures and stories are now on my website.

To this day, the bicycle has been my main means of travel. Maybe it's because I've always been afraid to drive a car; like my fear of the ball in sports.

My first long distance ride was that 60 mile trip just before 8th grade. Surprisingly, my parents allowed me to do it by myself. That was before the days of "helicopter parenting."

These days, people tend to worry that there is a child molester around every corner. The biggest danger is really traffic. I've always been very cautious.

No problem on that trip, except that I lost a canteen that my mother lent me. Back before the days of bottled water, one held water in a canteen.

I was in tears when I realized the canteen had fallen off my bike, but a friendly man, at a filling station along the way, tried to reassure me.

When I got home, my mom said, "who cares about the canteen." "We're glad you're home safe."

I was shy and easily traumatized in childhood, but it seemed like adults had my best interest at heart; except for my 8th grade shop teacher, Mr. Matilla.

Classmates called him "Matilla the gorilla." He was a gruff old guy who used to constantly scold students. He said he had to keep kids in line so they didn't goof off around power tools. Matilla was proud of the fact that, during his long career, no one had accidentally cut a finger off in his class.

I was afraid of that teacher, so my dad scheduled a conference with Mr. Matilla, the school principal and me.

In that conference, Matilla agreed to, as he put it, "treat me with kid gloves." That is, if I didn't use power tools.

I gladly agreed to just use hand tools to stay out of trouble. He set me aside, in that class and I used a woodworking tool called "the hand plane." My main accomplishment was to plane a few boards into piles of wood shavings on the floor. It kept me out of trouble.

To be totally fair, I did get a small table out of those efforts. Some students helped me glue the planed boards together.

I got through that semester okay, but the principal had an ominous warning for me at the end of our conference with my dad. The principal said, "Mr. Matilla will treat you okay, but you'll probably be in the military someday." "You've got to be tough to face life."

Back then, the draft was in full swing. It was during the Vietnam War. When people turned 18, they actually could be randomly drafted into the military; that, or face prosecution. If your number came up. You were drafted.

At that time an older brother was trying to get Conscientious Objector's Status. This was an exemption granted from military service for moral or religious objection to war. It wasn't easy to get. He could have gone to jail, or would have had to flee to Canada, but he was granted his objector's status. This, after a long legal process before the Draft Board.

Fortunately, my parents were very supportive of my brother's pacifist stance.

During childhood, I had the prospect of possible draft in the distant future. It was hanging over my head. By the time I reached 18, the draft had ended, however. By then, the Vietnam war was winding down.

I had a lot to fear in childhood, including a fear of driving cars. The bicycle is a gentler way to go. Since childhood, I've been on many a long distance tour. I've biked across USA, down the West Coast and around the Pacific Northwest; not to mention around town as well. Bicycling and maybe my fear of things like driving has kept me healthy to this day.

Artical as it was seen in the print edition of the Betty Pages.
juniorhigh

Start of my new blog. My other blog is an eclectic mix of ideas about sustainable economics. 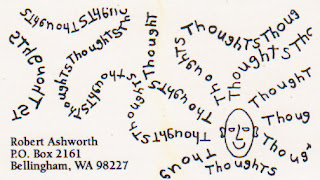 Stories from my past are liked so I decided to devote a blog to those stories. So far, the stories have been mixed into my main blog with all the other stuff. A lot of the my experiences have already been written. Some are in that blog under the label of My History . Others are in descriptions of photos related to my childhood and later history . Images on Flickr. No cost or subscription for browsing. Why study the life and ideas of someone that's not really a celebrity? Give it a try. See what you think. I have bicycled across USA, but that's not that unusual, I guess. It was pretty mellow and pleasent. This space might be a respite from extreme experiences, fame and fortune. Robert Ashworth. My Other blog Flickr Website Why all these things? Started at different times. On different platforms. Not everything fits one format. Image consultants might be cringing now. They'd say, "symplify, consolidate, edit, toss, find a few sound bytes." I'd
Read more 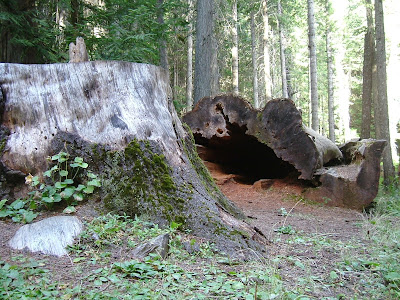 Stump of what used to be the tallest white pine in world I think. It had died by the time I saw this on my 2005 bicyce tour, but I'm reflecting on memories from much earlier days at a scout camp called Camp Grizzley, not far from there. Late 1960's. A kid, I was friends with when we were in the 6th grade, happened to be in the Mormon Scout Troop. The LDS Church, which Pullman Herald mistakenly called the "LSD Church" when the headline editor made a mistake. I followed my friend into that scout troop and my parents were okay with that. Mormonism is a conservative theology while my family was liberal, but part of being liberal is being ecumenical. In Pullman, the church and scout troop offerings were like a smorgasbord available to the whole town; or at least that's what my mom proudly proclaimed. In the Mormon troop, I quickly got bored with the militaristic feel and never made it past 2nd class badge. There was one somewhat erotic memory that did make thing
Read more